I recently spent a week in Singapore. I think I could safely say that it was one of my least relaxing vacations so far, but that’s entirely my fault. I didn’t even have my wife and kids with me, so I can’t blame anyone but myself. It was also one of the most enlightening and encouraging experiences I’ve had the pleasure of living through.

Like many citizens of the United States of America, I am not entirely pleased with “the way things are going” and have some wild ideas about how life would be better if I were in charge. And, along with many children, I have dreamed of starting my own country since I was young enough to know that was possible. As I have grown older, the complications involved have become more apparent, but the dream lives on. Instead of starting my own nation (a fantasy apparently reserved for Biblical Patriarchs) I’ve been on the lookout for some-place better than the USA that I could potentially join. 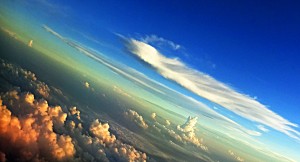 Which brings us back to Singapore. I’d heard a number of interesting things about the place. Even the “bad things” people had to say about it sounded pretty good to me (mostly the strict punishments for crimes). So, I figured I’d check it out.

I arrived on Saturday (2014-07-19) late in the evening and pretty tired. The next day I went for a walk, attended the first church I found, and was delighted to take part in their service. Everyone was welcoming; The music and preaching were superb and unaffected. I was moved to tears more than once. The Spirit is at work in Singapore! (Here’s a more detailed account of the first couple days)

The rest of the first few days were spent doing normal tourist things. I walked around a tropical rainforest nature reserve, the botanical gardens, and a few other tourist attractions. I went to both high end malls, and local shopping dives, and bought some stuff at each. I ogled the ultra expensive architecture and the signs saying “stay out or be shot with a machine gun.” 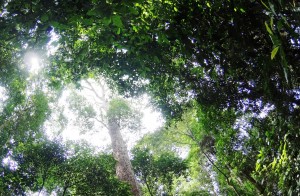 Deep in a rain-forest reserve in the heart of Singapore

By the fourth day, I had pretty much tired of being a tourist. Singapore is a western developed nation, and I’ve seen all of this before. Sure, maybe not this specific stuff, but it was starting to all look familiar. I had a pretty decent read on the local culture and way of doing things. I was ready to try something totally crazy.

So, I decided to try to explore Pulau Jong, a “virgin island” where, as far as anyone who I had talked to could tell, no one had set foot in living memory. Trying to do something unusual like this is, as I discovered, a great way to find out how a culture deals with the out of the ordinary. As it turns out, Singapore dealt with it surprisingly efficiently. 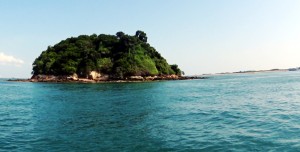 Junk Island, on the day of the expedition

Basically, I went to the docks and asked the locals about hiring a boat. They directed me to a government office, saying I needed permission to approach and land on the island. The next day I went to the government office and within ten minutes I had the address of the company in charge of the southern islands. After getting to the office (which was an adventure in itself) I talked to the park manager, sent him an e-mail, and a couple hours later had permission to go.

Permission to land on Pulau Jong

During the entire process, I filled out exactly zero official forms.

After that all I needed was a boat, so on Friday I set out once more to the docks only to meet with more setbacks. The boats there were all “working boats” used to shuttling crew to and from the big freighters. Eventually they directed me to the Republic of Singapore Yacht Club, where I had the opposite problem. All the boats for charter were both luxury yachts, and unavailable on short notice.

In desperation, I began walking around the bay, and happened on a group of run-down looking boats. One of the captains happened by, and to make a long story short, I hired him and his vessel on the spot for a voyage starting as soon as I could get my shoes off to wade out to the launch. Here’s the video of the resulting trip to the island. 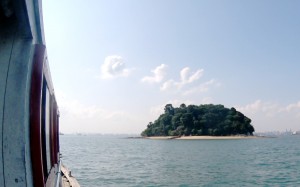 Junk Island in Singapore, right before I began my swim to shore.

So, I found the Singapore culture extremely flexible, responsive, practical, and welcoming. It seems that as long as you are polite and persistent you can do pretty much anything there! It appears to have a healthy Christian community, the public areas are clean and safe, and the government didn’t get in my way even once. 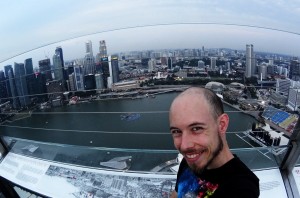 I strive to be awesome for God. Support my efforts at: http://sub.tryop.com
View all posts by Ziggy →
This entry was posted in Other and tagged Crazy Stuff, life. Bookmark the permalink.