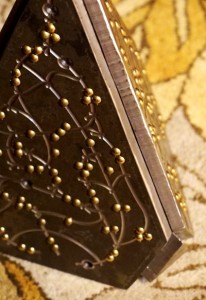 Two of four major sides of the Septacrypt visible here.

This is the Septacrypt. I designed it as a riddle and a message. What follows is a step-by-step guide to unraveling its intended meaning. But first, the…

This project started several years ago, as I pondered the philosophical quandary in which the creators of Penny Arcade found themselves. I have been a fairly regular reader of both the comic and the news-post, and both their honesty and epistomological despair have often struck me. They both clearly have knowledge of the Scripture, but do not know the Power of God. I was not infrequently moved to attempt a communication, but never with such force as would spur me to action. Further dampening my desire was the knowledge that a great many other persons daily vie for their attention, and if I was not willing to make myself either obnoxious or exceptional, my attempts would surely be wasted to no lasting effect.

Then, on the first of August, 2014, Jerry wrote this entry, which grounded my resolve to attempt excellence on behalf of the half-formed message burning in my soul. Thus, with deliberation, with meditation on despair, and with little hope of success, not knowing myself what form it would take, I set about…

The Forging of the Septacrypt

The better part of a year passed in planning. The message had to be elegant and honed. The delivery, inescapable. For months I sketched, rejected, started over. But instead of dragging you forwards through the many permutations, the options and contingencies, allow me to instead walk you nearly backwards through the process, to attempt an emulation of the experience of decoding the artifact, and arriving at the message within. 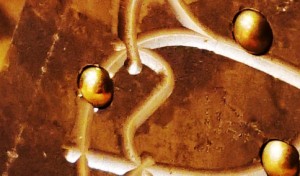 The minor engraving is visible in a line on the left, and barely visible in the space on the right.

The Septacrypt is a one-of-a-kind container made primarily of 5/8″ thick mild steel plate, stitch welded together, and studded with brass spheres. It is largely planar, with three major plates, three minor plates, and a bottom plate. A closer inspection will reveal that the spheres are situated in groups, and linked by irregular serpentine grooves. The bottom plate also bears lettering in grooves of the same manufacture. An even closer inspection will reveal minute engraving on the surface of the major and bottom plates, both in the interstitials of the grooves, and around the perimeter of each plate.

Both the position of the spheres, and the grooves is unique to each side. In fact, to better illustrate, allow me to illustrate. 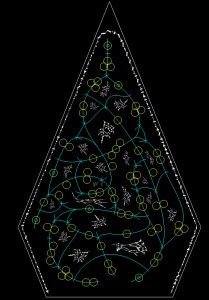 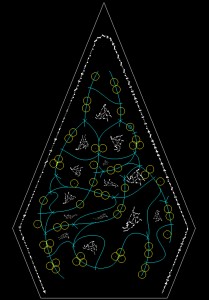 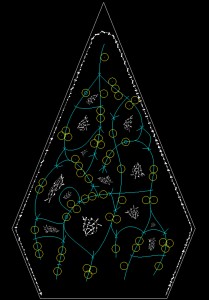 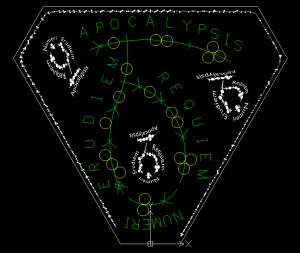 All this can be determined simply from looking at the exterior of the Septacrypt. From here, I will begin explaining the decoding, so if you’d like to try your hand at decoding it yourself, read no further. 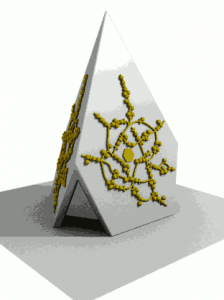 Conceptual model of the Septacrypt

To provide a bit of a visual buffer to those who may have unintentionally skipped ahead, I’ll explain a bit about the fabrication of the Septacrypt.

All of the initial design work was done in 3d in Blender. Once I had a nearly final design, I made a cardboard prototype and decoded it all by hand several times to ensure the veracity and readability of the plan. 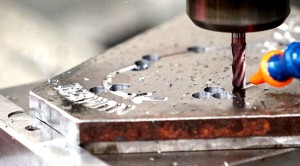 In-process photo of the Septacrypt base plate on a milling machine.

The steel was salvaged from the dumpster at my former employer, and the final dimensions were determined by the size of the plates. After transferring the design by hand through careful measurement, I cut the pieces out with a band-saw. The holes for the spheres and grooves were drafted in 2d cad and imported into the 2.5D CNC milling machine. Each plate was drilled in three steps, after which the groove was added with a ball-end mill in two passes.

The edges of the plates were then carefully milled to add the correct miter angle. With the machining complete, the welding began. First tack welding to hold the correct shape, and afterwards stitch welding to ensure structural cohesion. The gravity latch was added after all the welding was complete, so that the bottom fit as snugly and securely as possible.

The spheres were inserted last, retained by collapsing the edge of the sockets with a specially designed tool made from a torx bit.

Below the fold, spoilers for reals.

That is, I’ll explainin the process of…

The sequence around the perimeter of each panel, as well as that of the loop on the bottom plate is the same. Sets of zero to three spheres arranged along a line, separated by either one or two crossing lines. These represent a…

There are seven different arrangements of spheres, representing the numbers zero through six. As there are seven symbols, the number system is septal, or base seven. The reading order is in the “pointing” direction of the two crossing lines, referred to as “arrows” for simplicity. A single crossing line designates the separation of  septits within a single number. Counting through two septaves is provided below.

Using this system, one can convert the sphere patterns into numbers. The lines converge and diverge, but each unique path has three numbers on it. Many of the septits are used for multiple paths, which increases the effeciency of the encoding. Correctly decoded, the septits are as follows:

Which, when converted into decimal is:

But what do these numbers mean? For this, we must go back to the base plate to untangle the…

Numeri (the fourth book in the Pentateuch) is above the [4] and Apocalypsis (the 66th book in some canonizations of the Bible) is above the [66]. From this, one must deduce that the first number in the coordinate indicates the book in the Bible, the second number the chapter, and the third, the verse.

The other two words are confirmation checks against this system. Book one, chapter two, verse three speaks of God resting on the seventh day, and the word Requiem is translated into English as “rest.” Likewise, book five, chapter six, verse seven speaks of teaching the Law to one’s children, and the word Erudiem is translated into English as “learning.”

From here, the sets of coordinates may be followed, and the underlying message, theme, and/or communication revealed. The summary is as follows.

Which, broadly summarized, are themes on the three Persons of the Trinity. The specifics of the passages, and their context, was targeted based on what I knew of my intended audience.

The entire artifact is therefore an arcane sign of the cross mapped on to Mr. Holkins’ public persona. To the degree that public persona is the real person, the septacrypt is a tender benediction wrapped in the metal guise of a tortured malediction. Much like, one suspects, the man himself.

The numeric to sphere encoding was selected retroactively to minimize the number of spheres required to express the intended message, and to improve (however slightly) understand-ability. The number overlap was carefully created through extensive computer analysis of the KJV to locate appropriate patterns. You can download the software in question here: http://peripheralarbor.com/Bible/BibleParser.py

The septacrypt was delivered empty. It is, like language, a container with the meaning on the outside. 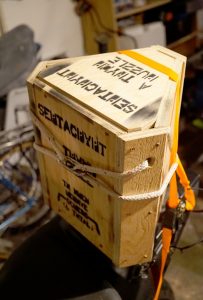 The custom-built shipping case, strapped to the back of my motorcycle for transport.

Was it worth it?

Shortly after delivering the Septacrypt to the Penny Arcade offices, I got a brief e-mail from Jerry which I responded to, but got no further correspondence. A few months later, I had the privilege to attend a get-together, at which time I was pleased to see that Jerry was keeping the artifact in his office. Although he had defeated the gravity latch, he reported no progress in decoding the message.

So, to the extent that I was able to get the attention of a celebrity for a brief amount of time through unconventional means, it was successful. To the more important goal of delivering an edifying payload to a tortured soul, I can only pray to that end, which, historically, has proven the most effective of last resorts towards such ends. So, if you wish to join me in my prayers , I hope this exposition has given you a concrete foothold for your faith, that no one is beyond the reach of the cause of Christ.

If you would like an artifact, sculpture, thing of your own, I accept commissions.

I strive to be awesome for God. Support my efforts at: http://sub.tryop.com
View all posts by Ziggy →
This entry was posted in Articles and tagged Crazy Stuff, Tryop. Bookmark the permalink.