The ground was laid for the project in mid-september 2013. Shamus Young had just started working on a 2d shmup game called Good Robot, and I was inspired to make a 3d model of the eponymous virtuous automaton. The model turned out pretty well, but besides a few renders I didn’t have anything to use it for.

A couple years later, it’s February 2016, and Good Robot is finally scheduled for release. I have the impulse to contribute to the marketing push by making some fanimation. I asked for help from the community, but none was forthcoming. So I started looking for inspiration. Shamus had mentioned the kind of music he wanted for the game, and a few of the commentors posted songs they had composed for the purpose. I dug through the blog archives and found four songs that fans had made, and decided they would serve well as a basis for the animations. One in particular stood out to me, Synth Opera by John “LazerBlade” Serafino (Note that this is the un-cut original. I edited the song for the animation). It was deep and moving and complex, and honestly rather daunting.

So, I set it aside and animated to the tune of Foster Powell’s goodrobot2_demo2 which elicited a definite narrative in my mind. This was the first hint. I was pretty happy with how the video turned out.

Spurred by an initial success, I animated to the other two songs. Drum And Face-1 by John “LazerBlade” Serafino turned out pretty well as animation. Bad Robot (I’ve misplaced the composer’s info! Sorry internet person!) made for a bad animation, again because it didn’t inspire me. I finished it out of a sense of completion, which was my second hint.

Then I started on Synth Opera. 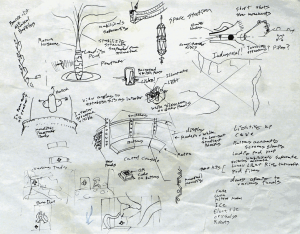 Those parts remain the best of the animation.

I was then faced with a conundrum. I could animate the rest with basically no reference and it would probably look terrible, or I could leave it unfinished. I chose the latter for almost a year. The game Good Robot itself was a financial failure, breaking the tiny indie studio that produced it. Finally, in February of 2017, I realized that there was a third option. An option I had employed in the Bad Robot animation to discouraging effect.

So I simply padded out the rest of the song with game footage. 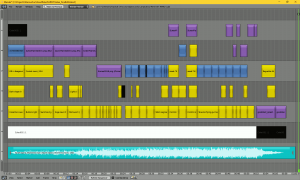 The purple in the edit sheet above is animations I made. The blue is game footage. Notice the contrast around the cut 24 seconds in.

If there’s a lesson here, it’s one that I have known for a long time, and simply failed to apply. If you don’t know where you’re going, figure that out before you start on the journey.

I strive to be awesome for God. Support my efforts at: http://sub.tryop.com
View all posts by Ziggy →
This entry was posted in Articles, Music and tagged Blender, General Truths. Bookmark the permalink.